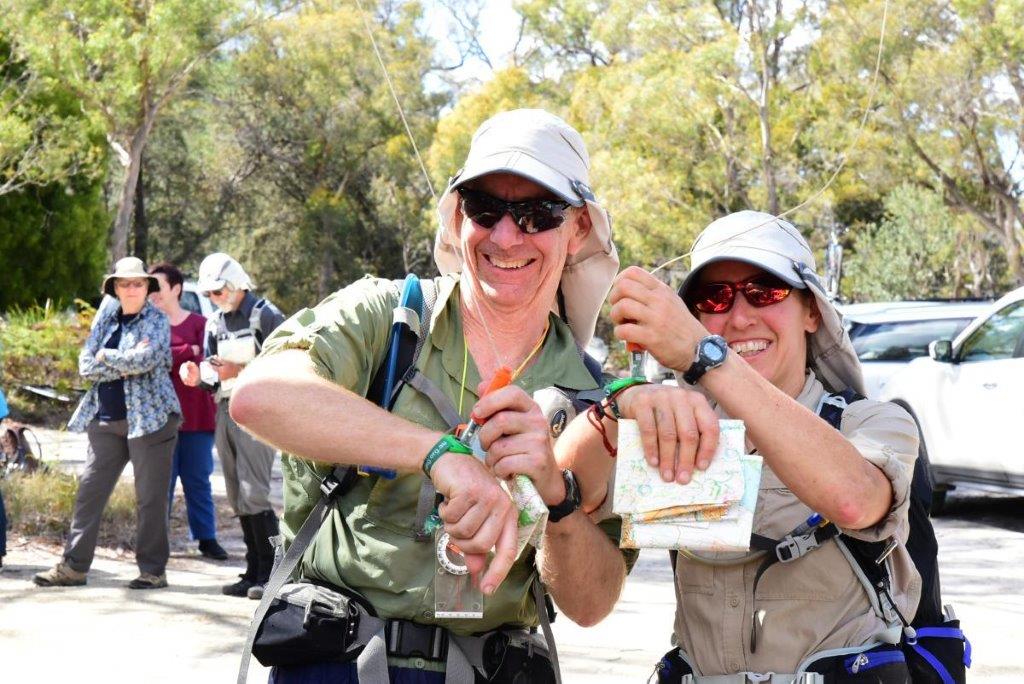 Saturday morning was cool but fine. It was a short drive to the HH site, and we chose to sit in our car to do our planning, with some big sheets of cardboard to put our maps on. First impression of the map was lots of good contour detail, some scary looking green vegetation, and some tight out of bounds areas to constrain our plan in and out of the HH, and in the southern part of the course. I outlined the OOB areas to make it clear where the connections were. The river was a significant north-south barrier which isolated a section of the course in the SW of the map. Points looked to be fairly uniformly distributed, but with a few holes, long legs and road links to try to minimise low scoring sections. Definitely a course too big to clear, so some careful planning to leave out a few outliers that would take too much time. We eventually settled on a plan that cherry-picked the peninsula then headed along the beach, across the N section of the course then looped down the west and into the SW section. This would be our first major decision point based on progress to get #80 and #77 or not, then cut through to ANC and ford the river before the final meandering route giving us lots of options depending on time and moving speed back to the HH to finish.

After the briefing we were on our way with a few other teams running east to the peninsula. The off track travel was a bit slow due to the lomandra tussock, and we were glad to be heading down to the beach and leave it behind. Some lovely scenic beach and rocks before a refill at the water drop, and we were heading into the hills. Thankfully the green in the creeks was fairly easily passed, and we made our way up to the open ridge with the new MTB track providing some interest. We dropped down the W side of the range with some impressive boulders onto the flatter terrain with a few dry swamps and tea tree bands to negotiate. Progress was steady to the water drop at the Ansons Bay road, then we entered the logged areas in the west finding a lot of unmarked tracks to help progress.

Dark came just before #86 and a few controls later we were running down the highway to get to the SW section. We saw our main competition Paul Williams and Dave Symons here, and guessed that we had almost no controls in common yet, with 12 hours still to go. The old tin mining operations threw in a few navigational challenges with some confusing detail. Decision time, and we decided to include the extras, so after a pack drop to collect #81 we looped through the S and back up to the highway. Again, more time lost with lots of confusing mine workings but nothing major. A couple of kms jogging along the road then cut through the paddocks to land at the ANC around 4AM to a cheery crew and some hot soup, then the ford where we decided to keep our shoes dry and go barefoot - freezing!

Dawn wasn't far away now, and it was time to refocus and wring the most we could out of around 20 controls left on offer. The challenge was to be bold enough to not bail out but then run out of things to do, while avoiding a desperate dash past easy points if time ran out. We dropped #57 and #38 from our plan and after a steep climb through #71 were into faster terrain. At #61 with 2.5 hours to go, things were looking pretty good to collect everything but #29 on our way back in. A last steep climb up to #40 and we were chasing Gill Fowler and Jo Sinclair back to the HH to finish with 20 minutes to spare.

We were surprised to find we'd won overall, but even more so that ACT had won the Interstate pointscore, since we had only 10 people competing. With Jeannie and Ron winning both Mixed Supervets and Ultravets, backed up by Toni Brown and David Poland second in Mixed Supervets, 3 teams was enough! It was nice to not be rushing off to catch a plane, enjoying dinner and brunch the next morning with long-time rogaining friends, before some MTB adventures on the new track and then over at Derby and Blue Tier for a few more days. A perfect way to round out a great week.

A huge thanks to the dedicated team who organised a world class event. A fabulous area and highly memorable Australasian championships for all the right reasons.

There are no up-coming events