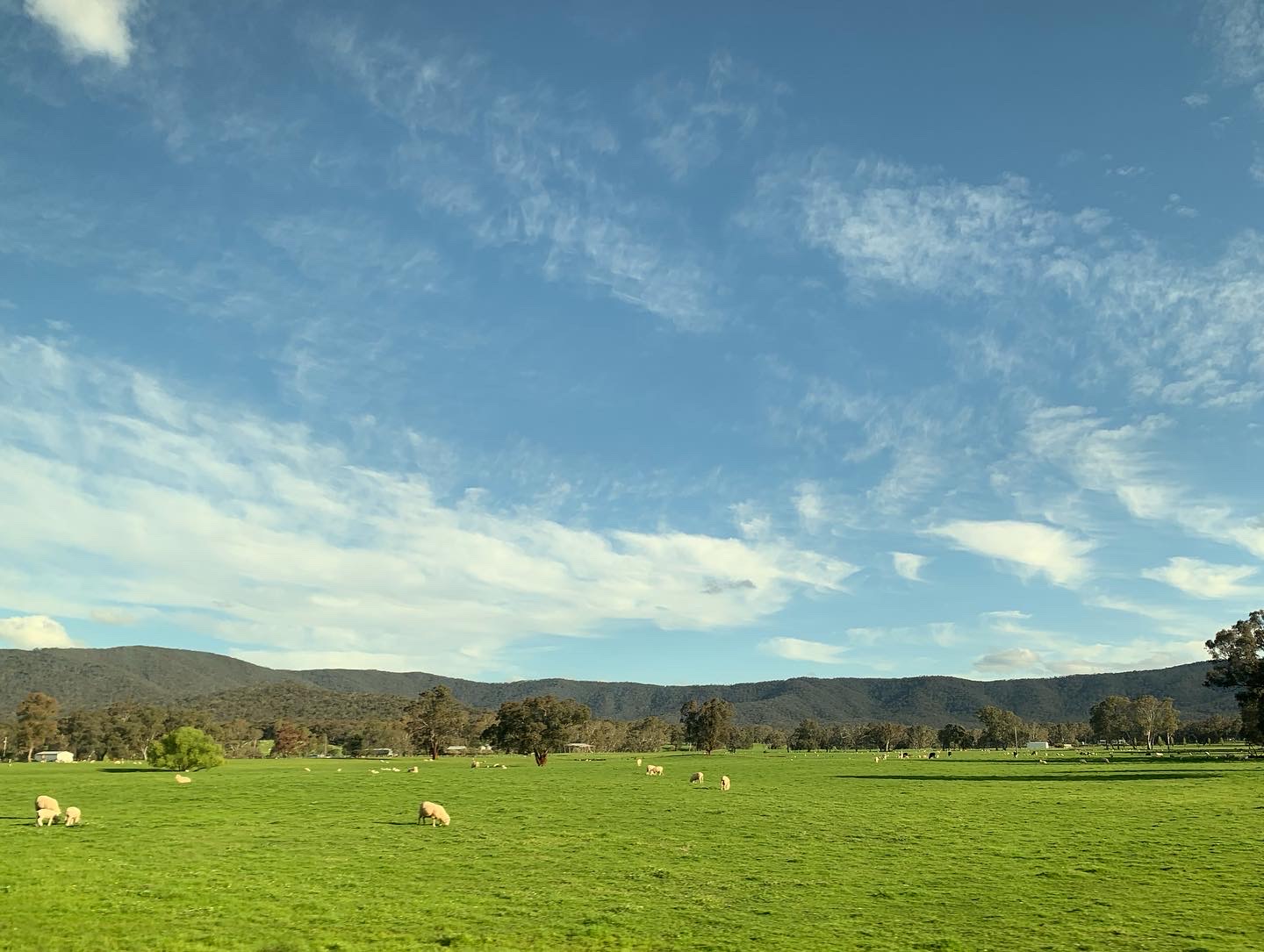 This month I travelled to Victoria to the Pyrenees Ponder Australasian Rogaining Championships where I competed with my dad, Neil Hawthorne. Unlike Neil, who has competed in the World Rogaining Championships multiple times, coming second in his category one year, I like to think of myself as an enthusiastic participant, rather than a champion. Happily, we achieved our modest goals: get over 1000 points, don’t get a concussion, don’t get irreversibly lost, and get back to the hash house on Saturday night to sleep at a reasonable hour.

The navigation was tricky for most checkpoints we visited, which ultimately made every point even more satisfying. The 1:30,000 scale really threw us. Gullies that seemed huge on the ground didn’t even show up on the map, and the hills were steep and rocky (we did the equivalent of two kunanyi/Mt Wellingtons). Consequently, we covered far less ground than on previous bush rogaines. However, Hobartians are used to the slopes of kunanyi, and so we tackled the hills with enthusiasm.

We looked at our watches after the third checkpoint, and realised we were covering a mere 2.5km/hour, having slowly picked our way around ankle aching contours between the three controls. We sat on a high point and revised our already modest plan. Happily, on the way to the next checkpoint, we stumbled across an unmarked motor bike track, which deposited us very close to the flag. It felt like a super-highway compared to the previous legs. We nailed the next couple of checkpoints and decided to add a few more back to our loop.

For some insane reason, we skipped the relatively nearby 103 and 94 due to my concern about pace, turning back towards 83 as per our revised loop. If I’d thought about it rationally, I’d have realised that we’d picked up our pace to a more reasonable 4 km/hour, despite the hills. Hindsight is a wonderful thing.

Our confidence was buoyed as we navigated down complex spurs and swampy gullies to the tricky 96 – an achievement quickly undermined when Neil discovered he’d been standing on an ant nest just beneath the flag. Realising we were ahead of schedule, we headed for 77 via 39. The mapped track around the private property wasn’t distinct enough to follow, so we made our own way, leaping across a swollen creek in a move I didn’t think was physically possible. We chugged our way up the spur straight onto the control, and then easily picked off 86 over the other side of the mountain range.

By now it was getting dark. We steeled ourselves for 104. The navigation looked tricky by day, and even more so by night. If we picked the wrong gully, we’d be in deep trouble. We played it safe by travelling along the road that snaked its way over the top of the mountain range and then down the track that followed the major spur off which our smaller target spur lay. This ‘safe route’ added an additional 3km to our leg. We pace counted our way down the track then taking a deep breath picked our way down what we hoped was the right spur. Keeping the gully to our left, we realised we were being forced to the east, until we stumbled across a lovely looking road. Fantastic, I thought. “We’re back on the main track,” Neil clarified. Reluctant to skip 100 points, we walked back up the track and tried again, picking our way down the steep and rocky spur, our eyes on our compass. As the gradient lessened, a bike trail appeared. What luck! We followed it until it dipped into a slight gully. I panicked, but Neil is possibly the calmest person I know. He expertly led us up to a saddle where the bike trail reappeared. It led us straight to the checkpoint. We returned to the HH at 10.30pm to a fantastic dinner, and didn’t leave until 7.15 the next morning. Luxury!

We drew up a modest route for the next morning, heading once again for the hills to get 20 and 90. Realising our route to 70 was going to be tricky from below, we made the arguably mad decision to climb up to the road at the top of the hill, taking the opportunity to nab an unplanned 60 pointer just over the hill. Time was ticking. We were still far from the HH with only 2.5-hours to go. All that time spent on kunanyi’s steep trails really paid off as we danced our way down the rough trail above 70. As we got closer, it became obvious that 70 was a long way down and there was no way of knowing which gully it was in. They all looked the same! We had 2-hours left. We decided to skip it and head to 30, which sat close to the road. We walked straight onto it.

Cocky, we decided to go for 50, which would mean taking a detour away from the HH. Risky with only 1.5-hours to go. We took a compass bearing towards the hills beyond, and performed another couple of unlikely jumps over the fast-moving creeks. To our dismay, we ended up in the wrong gully. Just as we were about to give up Neil spotted it in the adjacent gully. Now to head home. But first we had to find the fence line that was the only route through the private land between us and the HH. Following rough pads we picked our way around the hill, but were forced slightly off course by a prohibitively wide creek. Behold, a log! I’d managed to cross the Gordon River earlier this year on a log. I could do it now. It’s amazing how brave I can be when the prospect of losing 10 points per minute looms. We returned to the HH with more than half an hour to spare! Phew.

This was my second Australasian Rogaining Championships (the first being the 2021 ARC in South Australia’s mallee scrub). While I’ll never be a champion, I plan attend the 2023 ARC in NSW. The navigational challenge and atmosphere of a championship event is just so exciting. Thanks to Rogaining Victoria and the many volunteers that made it such an enjoyable experience, as well as the coffee machine at the HH (how Melbourne is that!). 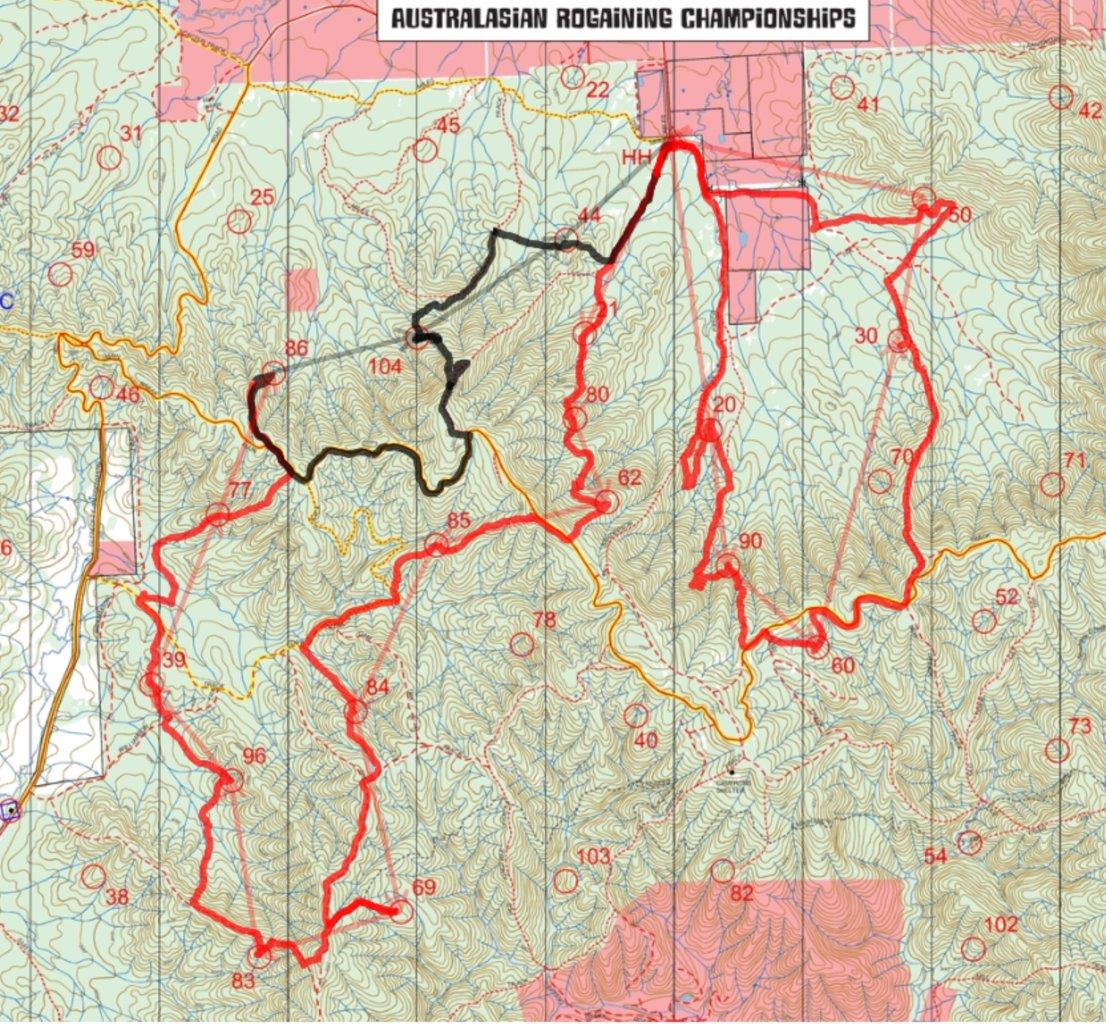