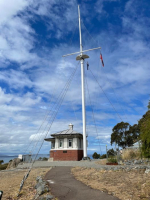 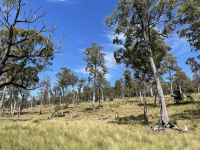 Looking for a great way to kick off Rogaining for 2012?  Try a romp through the beautiful highland marshes and forests near Derwent Bridge.

The area is about 2.5 hours drive from Hobart heading towards the West Coast on the Lyell Highway. The Hash House is approximately 7km east of Derwent Bridge. There is ample room for camping at the Hash House. 12 hour entrants are strongly advised to camp rather than attempt to travel after competing.

The area is a combination of button grass/alpine gasslands and eucalypt forest with both grass and heath understorys. The terrain is mostly undulating but part of the area extends steeply up to the Central Plateau highlands. For those who venture up you will be rewarded with lakes, tarns, alpine moorlands and views to the Cradle Mountain/Lake St Clair National Park. Throughout the area there is a network of roads and tracks varying from insignificant bush tracks through to a major bitumen road.

The map is based on the existing 1:25,000 land series maps with updated tracks and other significant information. It will be printed on two A3 sheets at a scale of 1:33,333 and will have 10 metre contours. Magnetic north lines will be overprinted.

There will be a 12 and 6 hour option. Normal rogaine rules apply. Navlight electronic timing will be used.

Food and refreshments for competitors will be provided at the end of the event, but competitors staying overnight should bring their own breakfast.  Thanks go to moxiegear.com.au for some spot prizes.

Entries are now open via the Entryhub.  Cost for entry will be $60 for individuals ($50 concession) and $120 for families. Normal entry closes Friday 24th February, 2012. A late fee of $15/person applies after this date. No entries can be accepted after Wednesday the 29th February, 2012. Payment options are PayPal, Credit Card (via PayPal), Bank Transfer or Cheque.  No on the day entries.

A competitors information pack will be emailed out after close of entries, but in the meantime enquiries should be directed to Bernard Walker by email at .