This event was held last October.  The University of Tasmania was represented by Jess Fuller-Smith, Omar Martin-Gonzales and Charles Hooley.  They performed well, coming second in the event.  Read an account of their experience kindly provided by Jess here. 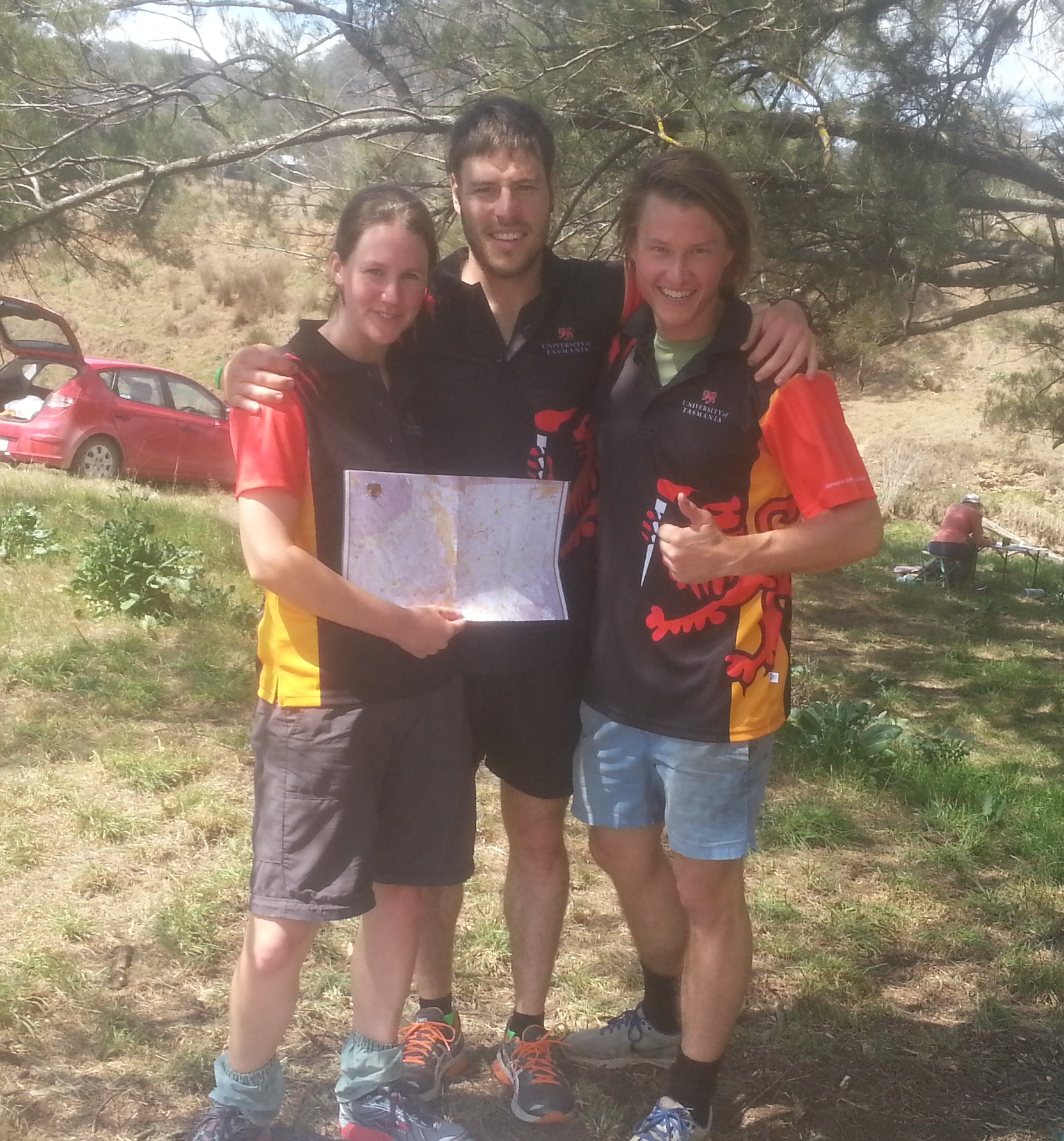 We decided to come to the Ross Rummage Rogaine because David had been to the 2003 Australian Championships here many years ago and enjoyed the area.  We were joined by the ACT Rogaining mascot, Barkley the Koala, who is by now a very experienced rogainer and photo bomber. We managed to get cheap flights to Launceston and were kindly put up by Christine and Paul for Friday and Sunday nights and also driven to and from the event. Fantastic hosts! 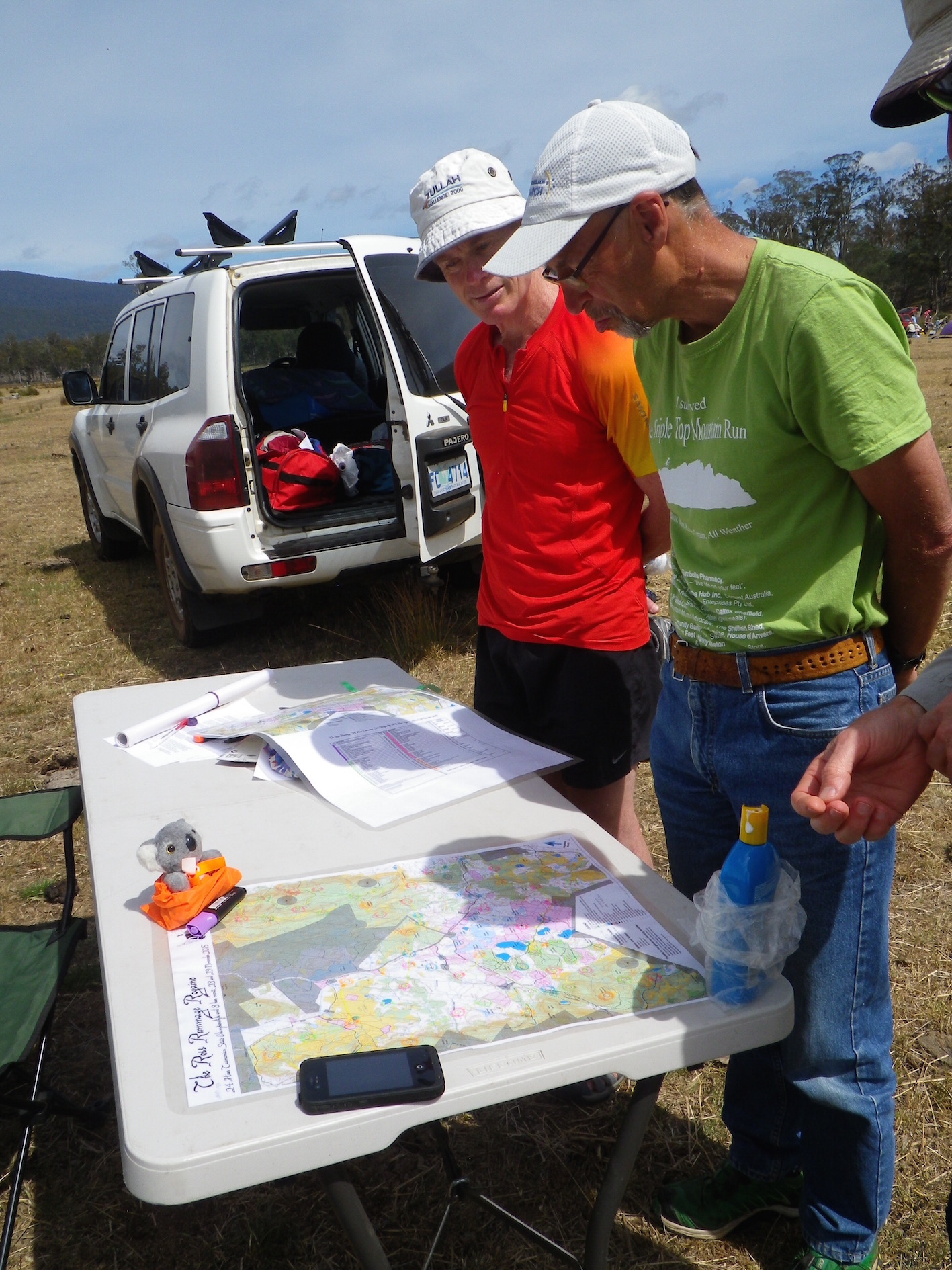 Omar, Charlie and I have recently returned from the Australasian Rogaining Championships (10-11 October 2015), where we were fortunate to receive Nigel Aylott Memorial Sports Foundation funding to represent the University of Tasmania in the Intervarsity component of this event.

Having not competed together in an event like this before, we headed off to a night orienteering event near Hobart for some training. This was great in confirming that we would be alright if lost together in the bush at night, as we never quite found the first control but had a really good time all the same.

At some point in the early morning we decided to have a short nap under a space blanket, assuming that we’d soon get cold and uncomfortable and then be on our way. Surprisingly, we discovered we could nap relatively comfortably huddled up in a space blanket cocoon, so our short nap lasted a couple of hours longer than anticipated.

With less than hour to go we had one final decision – finish a bit early or continue straight through the Hash House to a control past it for an extra 30 points. As it turned out getting this control was the right decision, as we beat another intervarsity team by 20 points to place second out of nine teams in the intervarsity competition. Overall we placed 41 out of 143 teams in the Australasian Championships.

Dry, fast paths and comfortable walking weather provided a base from which seventy two people enjoyed riding or walking the Sandford area in the latest MTBNav-Bush event held on 1st March 2015. Organisers Keith Carroll and Mark Hey had created a course using forty eight controls where participants needed to visit sites to find the right answer to a question given three options.

After four hours of traverse, in the Female Foot division the first two Teams arrived back at the Hash House with 510 points each. While the Team of Rosie Rutledge, Robyn Chapman and Adele Winslow focused mainly east and west from the Hash House and south of Rifle Range Road, that of Liz Canning and Dorothy Steane ventured into the maze of bike tracks on private property between Dixon Point Road and Dorans Road. Both Teams visited twelve controls. Well done ladies.

Most traveled Team in the event was that of Gordon Taylor, Paul Kleywegt, Jules Evans and Lester Dion in the Male Bike who in fours hours visited thirty nine controls at all points of the compass. Dorans Road was the main area they bypassed, along with a few controls in the Clifton Beach area. A very solid ride, and one that compares with the thirty three controls visited by second placed Team Jeff Dunn and Jemery Day. The next seven Teams in Male Bike also scored high points, indicating a high depth of capability.

While there were only two Teams in Female Bike, Karen Wild-Allen and Rachel Allen ended up just 150 points to the good of Nadine Rowell, Helen Burford and Nicole Carter.

In Male Foot, the youngsters Dexter Canning and Tarn Leith, assisted by Dexter’s dad Hugh, achieved a ninety point advantage over the mature Team of Ross Kelly, Ian Woolford and Rob Hunter. Running solo and unofficial in this category, Andrew Mackay once again displayed his running prowess by gaining almost twice the points of the leading Team.

In the two hour event, Graham Sargison and Renny Duckett in Male Bike and Diana Cossar-Burgess and Sebastian Burgess in Mixed Bike were the only entries, and both Teams enjoyed solid rides mainly in the area to the south west of the Hash House.

When it came to tallying the points, a gremlin was encountered in that an earlier version of the QnA had been printed inadvertently, meaning that the answer sheet contained four incorrect answers. Thus those questions were marked as incorrect when in fact they were correct. Presentations were based on the erroneous values, and made subject to later validation given there was not the time to redo the figures on the spot. Keith and I apologise to those affected, which mainly means Male Bike where there was a remix of the first seven placings.

Mixed Bike were also affected by the corrected points tally in that third to fifth position finishers were rearranged. First and Second remained unchanged, as did the placings in all other categories.

At the conclusion of the event, a lovely afternoon tea was provided by Gayle West and the Orienteering Tasmania Juniors, and spot prizes were drawn being vouchers and merchandise provided by Ride Bellerive. Appreciation is also acknowledged to Andy Nuss and Jock Campbell for allowing access onto their respective properties.

Keith and I are pleased the event was enjoyed by all those who participated, and we encourage you to reuse the map, excluding private property, for future rides or walks in the Sandford area.

Event Results can be downloaded here.

The Rogaining Tasmania 2014 AGM will be held at approximately 2:30pm on Saturday 1 March 2015 at the Sandford Hall (while the results for the Sandford MTBNav and foot rogaine are being processed).

The meeting agenda includes background information about a special resolution concerning our annual audit and the 2014 Presidents Report. The documents for this meeting are available by clicking on the links below: